Making a Web App for NLP on Tweets

This week I used some natural language processing techniques and built a web app for exploring the tweets of the U.S. presidential candidates, or, as I call them, candidential tweets.

There are currently over 700 people who have officially filed with the FEC to run for president of the United States. I focused on 22 candidates -- 17 Republicans, 4 Democrats, and 1 from the Green Party -- and pulled their most recent tweets into Python using the twitter API and the Tweepy Python package. I first looked at some basic statistics; who has the most retweets? Who has the most favorites? 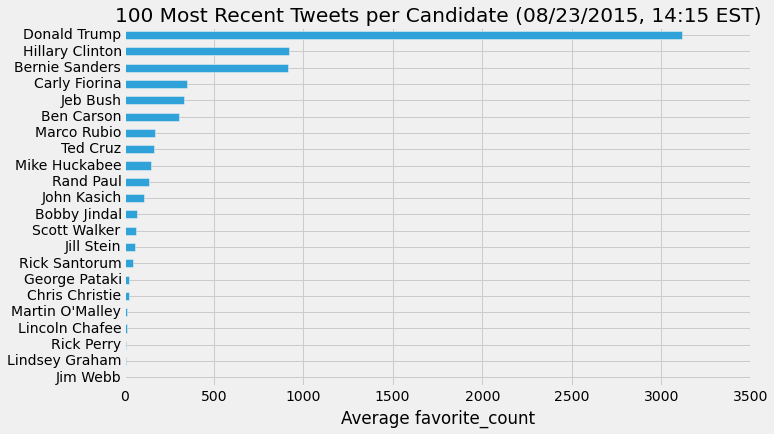 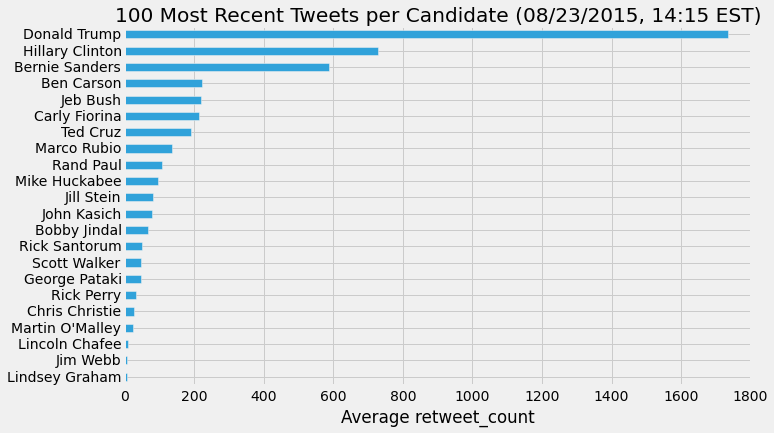 I should mention here that basing predictions of who will get their party nomination on Twitter favorites or retweets is quite dubious. It's one thing to click a 'like' or 'share' button on a social media site, but quite another to actually get your butt down to the polling station on election day. Also, some twitter users may retweet a candidate, not as an endorsement or show of support, but to ridicule them. 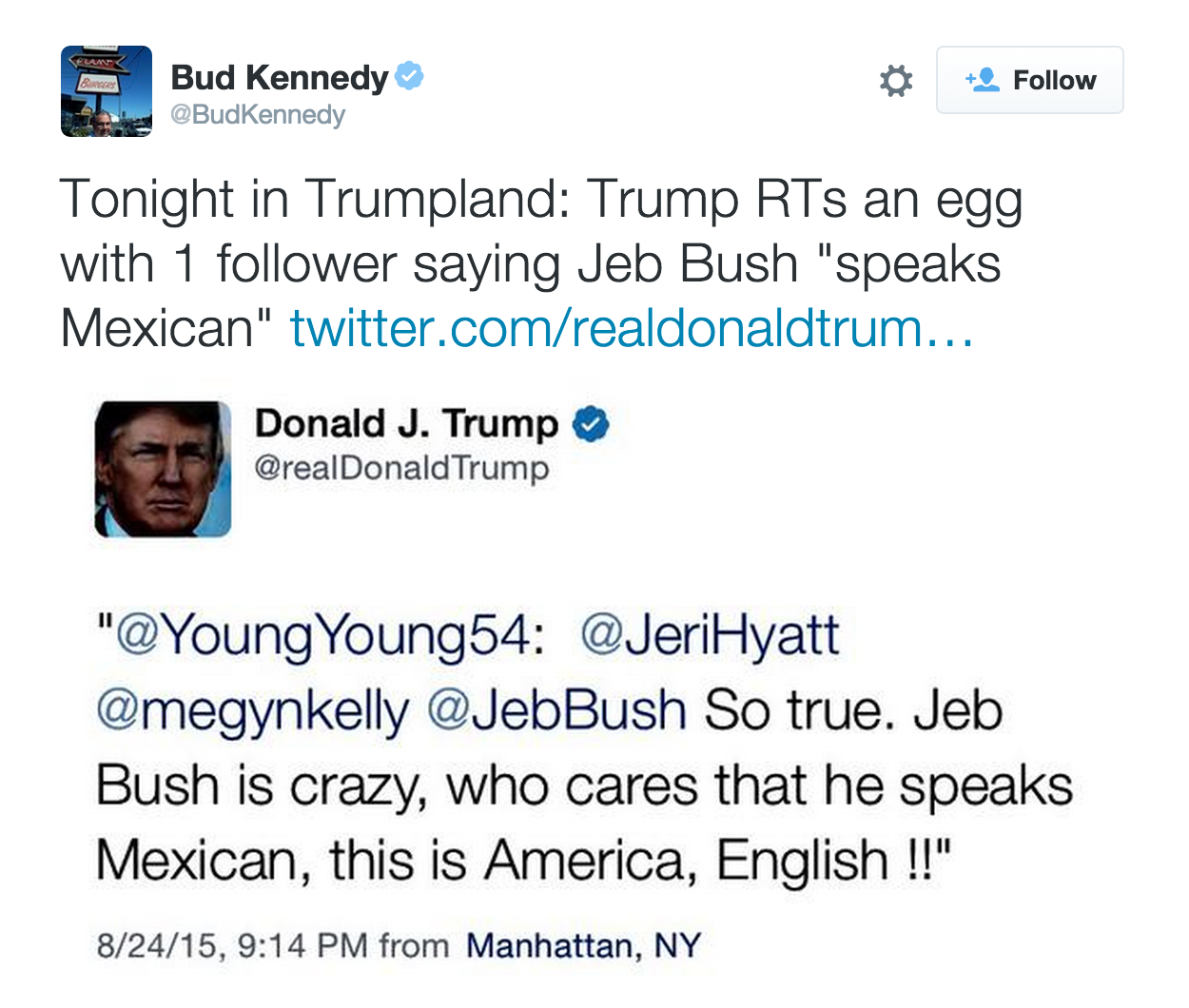 It's also still early in the nomination process, and a lot could change in the next year. What these numbers can show is simply the level of social media engagement each candidate achieves.

Next I used a Python package for text analysis, pattern.en. This package contains functions for extracting sentiment and mood from text. From the pattern.en documentation:

The sentiment() function returns a (polarity, subjectivity)-tuple for the given sentence, based on the adjectives it contains, where polarity is a value between -1.0 and +1.0 and subjectivity between 0.0 and 1.0. ... Accuracy is about 75% for movie reviews. 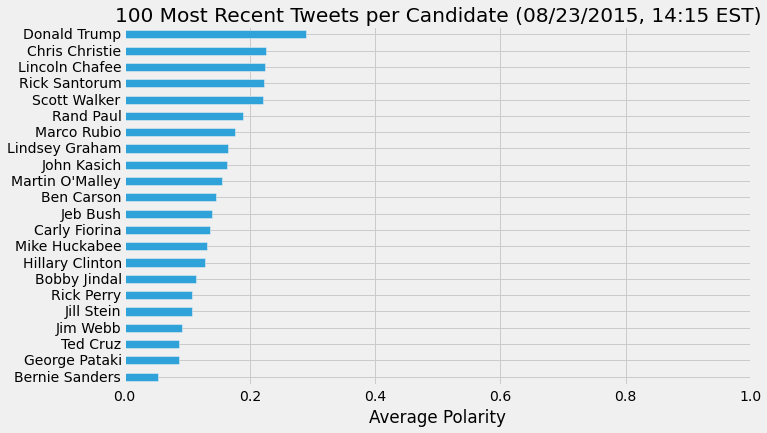 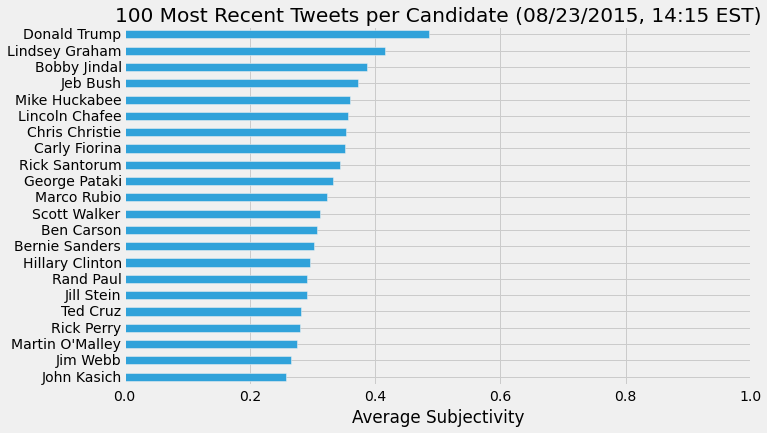 To calculate the level of certainty for each candidate, I used the pattern.en modality funtion.

The documentation uses the term facts here to describe text with high modality, but I would argue that this does not indicate a level of truth, only the level of confidence or certainty expressed by the writer. I have seen many writers express absolute falsehoods with a high level of certainty.

With the modality function, I gave each tweet a certainty score and, again, found the average for each candidate's tweets. Unsurprisingly, presidential candidates express themselves with a high degree of certainty. 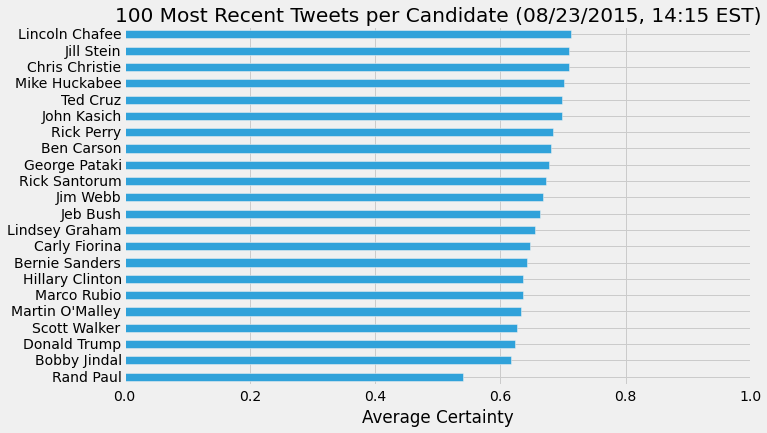 Finally, I packaged all of this into a script and created a simple web application using Spyre. You can see the app in action on my website or take a look at the code on GitHub.

While my original analysis was conducted on the 100 most recent tweets, I restricted the number of tweets to 20 for the web app. First, I felt this would give users more up to date information (most candidates tweet 20 times in just a few days). Second, it protects the web app from crashing due to exceding the rate limit of the Twitter API (which occured a few times during testing).

Personally, I'm quite curious to see how these numbers will change as election season continues.